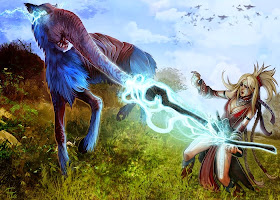 This blue-furred creature sports an elephantine trunk and a camel-like body. The air around it seems to shimmer with magical potential, and it gazes around with doe-like, intelligent eyes.

Cool Factor: Well it's a blue skinned camel with an elephant truck? I guess that is cool. It does drain all your magic items. Now that is cool. That great big trunk is great for sniffing out that magic stuff. Here is a few encounter ideas
-A dwarf comes to town seeking a treasure horde. Only problem is he doesn't exactly know its location. He suggest the group find and tame a Disenchanter. With the help of the beast he can pinpoint what he seeks.
-A town has a herd of Disenchanters. They feed them magic items. They have a great distrust of the arcane and have used this herd to keep adventurers at bay.

Combat: The main offensive ability of the Disenchanter is to drain away magic from items. It tends to target the most powerful one. Although if it is concealed it will randomly target items on the individual. If a magic item is hit by the Disenchanter you get a saving throw. If failed the magic is drained from the item and it become normal.
On the positive side if all your magic items are concealed or if it targets a specific item it get -6 to attack. The Disenchanter also requires a +1 weapon to be harmed.

Verdict: There is quite a bit you can do with a Disenchanter. They have a nice unique ability that can add some flavor to an encounter or a session. Also if you have given your group too much treasure and need to scale back a bit an encounter with Disenchanter might just do the trick.

Note: There is an ecology article on the Disenchanter in Paizo's Misfit Monsters Redeemed. It is a Pathfinder product but 95% of the material is fluff.
Exoknight at 7:09 PM
Share